skip to main | skip to sidebar

Is Global Warming Man-made or Mann-made? 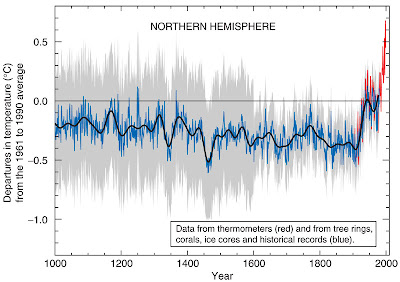 In my opinion, the "hockey stick chart" is the dominant icon of the Anthropogenic Global Warming (AGW) debate. It was produced by Michael Mann of Penn State in 2001 and relied on by a number of prominent scientists and government agencies, but was challenged and eventually abandoned.

What intrigues me about the hockey stick chart is its reliance on temperatures since 1960 and on other measurements (such as ice cores and tree rings) prior to that. The correlation between tree ring data and measured temperatures is fundamental to this model, which makes the following graph of tree rings and temperatures somewhat sensational:

Insofar as the "hockey stick" represents what people are debating when they talk about "Global Warming," I'd say it's definitely "Mann-made."

Posted by Scott W. Somerville at 8:52 AM

One of the things that I've heard a lot from the groups/blogs/newpapers which believe in AGW is that the emails are miscommunications, taken out of context, or just informal comments not really meant by their writers.

Ok, that's an idea. However, there is more to what was released than just emails. There was code released too!

Check this out for an investigation of a chunk of code. There is no "miscommunication" here, there is out and out fakery:

Thanks, J. I read through that post and the (surprisingly intelligent) posts that followed it. I can't tell where this snippet of code fits into the big picture of the data processing, but it certainly looks like a good candidate for the "hide the decline" code, because the "fudge factor" arbitrarily jumps to high values right at 1960, which is when the "tree-ring to measured temperature" discrepancy begins.

For an even more damaging critique of AGW as a whole, try this:

Wikipedia has a good writeup of the "hockey stick controversy."